Somewhere in the Balkans
We occasionally enter the world of modern warfare and treat these games as tactical exercises which usually involve hidden forces awaiting the advance of the opposition.

The game involved the advance along the length of the board by David and Graham's troops. They had mechanised columns with some air support and were restricted by terrain to using only the bridges for the heavy armour. The terrain was rolling and a village dominated the exit from the first bridge, situated on the ridge above the river. 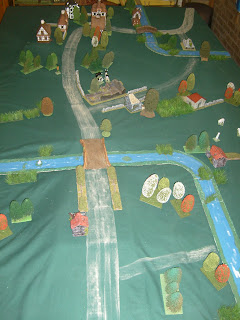 Surely this would just entail a simple deployment exercise from one end of the table across to exit over the second bridge? You'd think they were expecting trouble!
This is the view of the table from the exit position, the dominant village at the far end of the board with the approach route in the upper right corner.
No sign of any arriving troops, or anyone else for that matter!
Hold on ....  is that a farmer and his cattle north of the bridge? 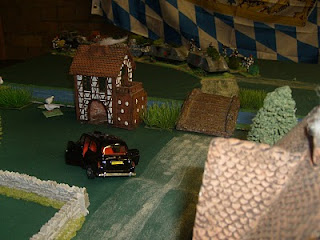 The invading forces have arrived. The locals have been warned ..... flee and take what you can with you. The local taxi has obviously broken down, with no time to repair it, the owner has abandoned it.
APC's head an armoured column, fully alerted to any hostile motion.
Will this be another fruitless day?
The figures and vehicles are all plastic and are our usual minimal cost purchases from Pound shops and other bargain bags. (See £30 army blog).
A bit of imagination and a nice paint job (well done again John) works really well.
Once again movement is done with our usual measuring sticks and the game is covered by our usual rules base upon number of bases/points when firing multiplied by an average dice. (2,3,3,4,4,5).
We don't have complicated tank/aircraft rules as we prefer to resolve them by a simple roll to hit/miss followed by damage inflicted against a points value. Hit it hard enough and it is out of action! ............Simples 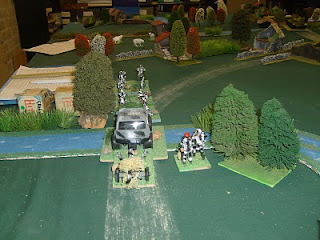 I will leave you at the point that Graham
has sent his infantry across the river on
foot exploring the open fields, led
by his Officer.
Will that be wise?   BANG!
He drops.... now his squad are stalled.
What to do ?
Note the Hit/miss dice. Sponge covered, hence no damage to paint ... 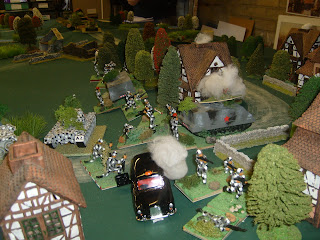 David has sent his APC and dismounted
infantry up the steep slopes from the river
as well as over the bridge to scout the village approaches.  Oh he'll never fall for the
exploding car booby trap will he?
An RPG missile takes out the lead APC.
In inauspicious start .......... game on!
To be continued    ............
Posted by paul halliday at 00:10 1 comment: Links to this post