As I mentioned in my previous post I have now succumbed and purchased some Great Northern War figures from Musketeer Miniatures. The GNW is something which has fascinated me for many years but was poorly represented in the 25-30mm market. There seems to be a rising interest in this period now with both new figures and some interesting books available. My starting point was The Battle of Poltava by Angus Konstam, an Osprey title which I bought a few (maybe 15?) years ago. Then more recently I got a copy of Peter Englunds book on Poltava and as a result I resolved to start collecting figures for this period. Luckily the Musketeer Miniatures range has been expanded recently after a couple of years of stagnation. 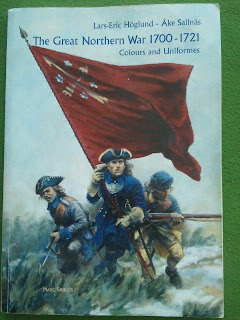 After buying a couple of regiments of figures I purchased the above book. This is an excellent reference work on the Swedish uniforms and organisation. The only slight criticism I have is that the quality of the illustrations are a little dissappointing. Having said that there is more than enough information in this book to recreate the entire Swedish army of the GNW! I highly recommend it and I intend to purchase the follow up volume when I begin building my Russian forces.
Anyway below are a few of the figures I have already painted, in fact the first regiment is almost complete. This is the Uppland regiment, one of the Indelta formations. My painting doesnt really do justice to the figures but I still think you can see the quality of them in these photos. 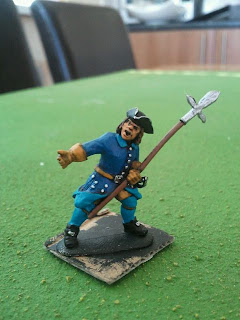 NCO of the Uppland Regiment. 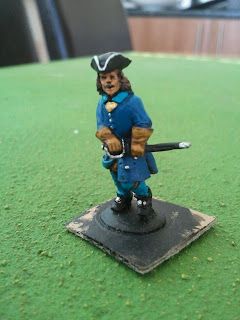 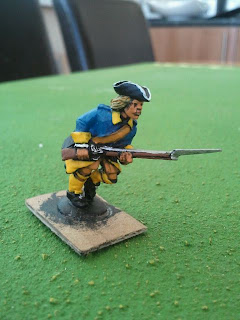 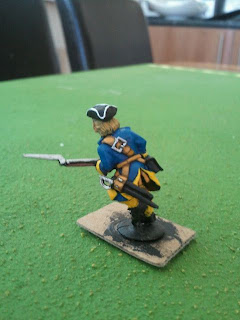 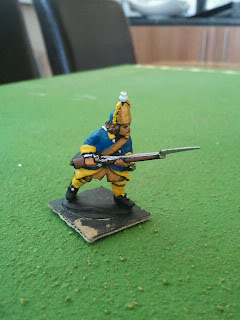 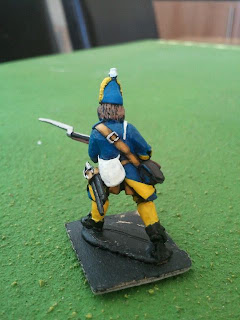 And again a rear view.

I hope to have the regiment based and with their flag attached by the end of this week. I am on night shift at the moment which leaves me with little time to devote to wargaming and quite honestly leaves me just too tired. Once this regiment is complete I must choose whether to complete the second one ( the Vastmanland), or get some more of my Maharattas done. I will see how the mood takes me!

Oh and of course the Vauban stuff needs completing too . . . .

Posted by Dave H at 02:04 No comments: Links to this post

While I was helping out with picking up some stuff from the wholesalers I came across these two pieces in the aquarium section. 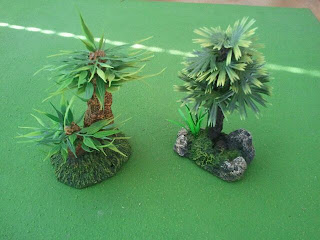 Now being a wargamer I immediately saw their wargaming potential! I have it in mind to use them as jungle terrain for my Maharatta project, although I am sure John will think of a few more scenarios in which they can be utilised. 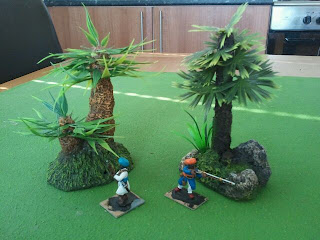 I have pictured them with a couple of my Maharatta figures (Redoubt) to give an idea of the scale. 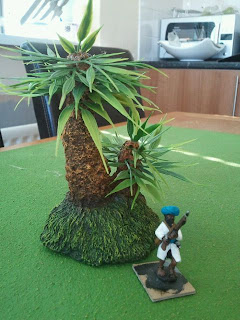 As you can see they are fairly substantial and require no further work! 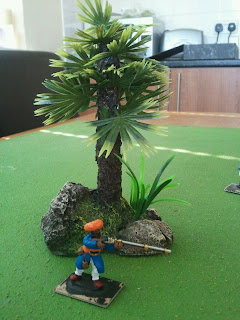 I really like them and I will keep an eye out for any others next time I am there. Especially considering I paid £4.50 for the two.

I have also posted a couple of pics of my first complete Maharatta regular battalion. This project is a slow burner (as I am a slow painter lol). However I am chipping away and I have another 16 regulars primed and ready to go and these will complete the Red turban battalion. 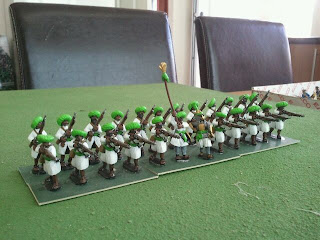 In addition to these I have about 20 almost complete sepoys sitting in my painting box. Why can't I concentrate on one thing at a time?! In the next couple of weeks I hope to get these progressed but, as John has mentioned in his post preceeding mine, I have been a little diverted by the Vauban fortifications and a recent purchase of some Great Northern War figures from Musketeer Miniatures. 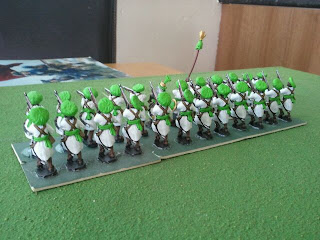 I have almost completed the first regiment (Uppland). This period has been one which I have wanted to do for a long time and I have been waiting for the right figures to be produced. Now that Bill at Musketeer Miniatures has started to expand his range I have given in to temptation.
I will post some pics of these later tonight hopefully.

Hi to everyone who follows our little blog,we have neglected the blog over the last few weeks but , thanks to Paul , I have now been dragged kicking and screaming into the 21st century and intend to do a weekly round up of what each member of our group is doing.

They are all now based on 3" x 3" hardbord bases containing 6 or 8 figures per unit, all armies contain at least 300 or 400 figures, so i have had my work cut out but the end result looks good.( photos to follow, if Paul remembers his camera !! )

Paul has been busy finishing his 7YW Austrians, Dave has been busy painting some Great Northern War figs. as well as continuing with his Sepoys and building the Great Wall of China ( well if it gets any bigger that's what his Vauban defences will look like !) Graham is furiously painting his new garden shed , as well as Napoleonic Brunswickers and Saxons and keeps promising to complete his vast WW2 collection , we all think WW3 will have broken out before we actually see these however!!

I will attempt to explain our Wargaming Philosophy and an overview of our very simplistic rules in the next blog, if you are a follower, please take time to comment on what we are doing, and tell a friend about our blog.
Posted by johnc at 18:10 2 comments: Links to this post

After far too many months I have revisited my Vauban fortification project. I posted in October last year showing the Ravelin which I have completed and I thought it was about time I pushed on and finished this project. So I have now started work on constructing the two Bastions which will form the main part of the defensive works. As with the Ravelin I have not bought any materials other than wood glue. I intend to build this as cheaply as possible! I have used a sheet of hardboard left over from lining the shed in the garden and some off cuts of chip board from an old set of drawers which I was replacing. Here is how I have got on so far. 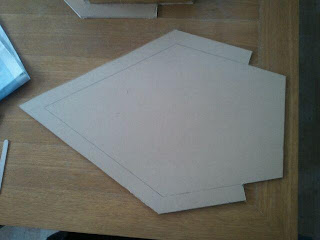 The base board for the Bastion with cut outs at the rear to allow the curtain walls to abutt snuggly (thats the theory!). 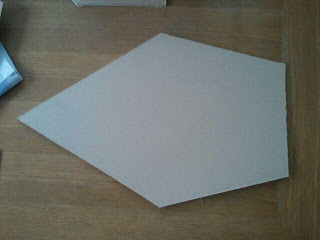 The upper level of the bastion again from hardboard. 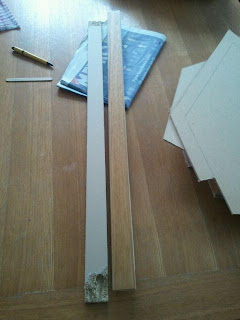 The two lengths of retrieved chip board which will form the wall supports. 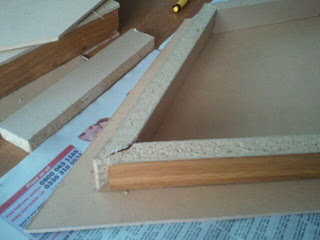 I have glued and tacked the wall supports to the base after sawing them to (approximately) the right length and adding angled cuts. 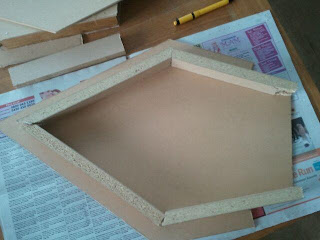 The suppoting walls glued and tacked into position. As you can see the construction is fairly rough but all this will be covered by card and Tetrion eventually. 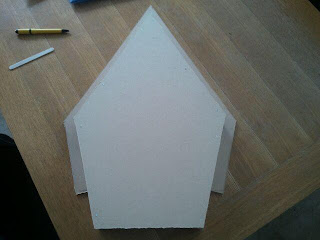 The upper floor is now glued and tacked on top of the walls. 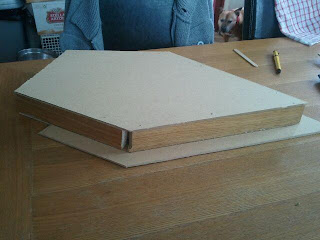 A side view of the basic construction (with one of my dogs looking on :) ). My next step will be to add card to get the angled wall surface and to add the top of the battlement. Hopefully this will progress in the next couple of days. I just need to find some more offcuts of wood!

Posted by Dave H at 21:04 No comments: Links to this post

Sorry to have neglected this for so long but I think we've all been swallowed up with commitments lately.

I will post some of our pictures during the latest games, we are still playing which is a great comfort for our loved ones as it gets us out of their hair at least once a week. (Or month in David's case).

Here are a few pics of my latest venture with these lovely figures from Front Rank Seven Years War Austrians. I decided last year to go into this period in 28mm, mainly because of the great games we have had previously using John's brilliant 40mm semi flats. The only problem is they are getting old as we all are and we're much more ham fisted now than ever before.................  yes I know it's mainly me!

So I bought three battalions last year and they are nearly finished. However, I've another five battalions as well as cavalry and guns so this summer will get them on the board. John is working on the Prussian opposition. 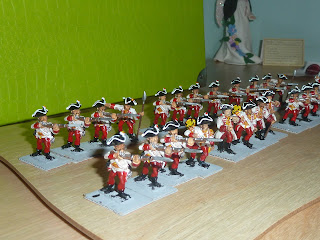 I've started with an Hungarian Brigade. 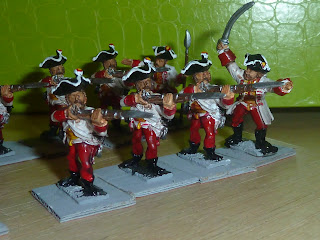 As we approach the anniversary of the battle this year we thought we would revisit the battle again to re fight it.

As a group we have fought this battle under many variations. Initially taking parts of the battle as a re- enactment, namely Hougement to La Haye Saint as well as D'Erlon's assault. We also re fought the entire battle in 6mm scale a long time ago and this was something that has caught my imagination for a long time. Why could we not use 25mm figures and have the battle re fought on a Brigade scale?

So I began the process with John and we think we have a solution to the logistics. We hope that the result will be spectacular and represent the Allied and French Corps down to battalion and  cavalry regimental level.

We have play tested some rules to make having 33 battalions per Corps manageble and quick. I'll post some pictures of this Sundays game where we hope to test the game play.
Posted by paul halliday at 23:01 1 comment: Links to this post