Mahratta Update (It's been a while!)

Well it has been a while since we last posted and I wish we had a good excuse! Just the usual stuff about everyday life getting in the way (blah blah blah). I personally have not played a huge amount of games since Christmas but I know the lads have played almost weekly and Paul has some pics from those games, so hopefully he will be posting these soon. 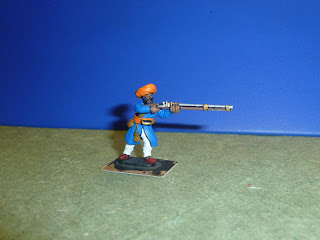 Any way I have been plodding on slowly with my Mahratta Wars project and here are a few pics to prove it. All figures are Redoubt Miniatures but I was interested to see that Eureka in Australia are to release a range of Mysoreans which will cover Tipoo Sultan and Haidar Ali. I am not sure whether these figures are compatible with the Redoubt ones but I may request a few samples to see them in the flesh. Above is the first Matchlock Irregular that I have painted and I am pleased with the way he has come out. I intend to have 2 or 3 units (each of 24 figures) to support the regular battalions. As with the regulars I will be using a simple uniting colour scheme. These units will be distinguished by their coat colour (Blue above) and will have different sash and turban clours within the unit to give them a more irregular appearance. 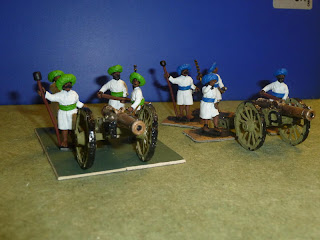 I have added another artillery crew, this time in blue turbans. Redoubt also do artillery just in loin cloths which I will mix in with the next set of crews that I paint. 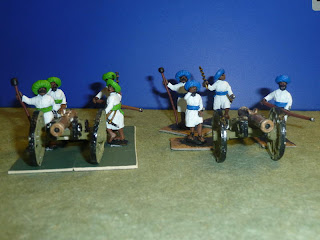 Another view of the artillery. Elite Mininiatures 12pdr guns from my Napoleonic collection. 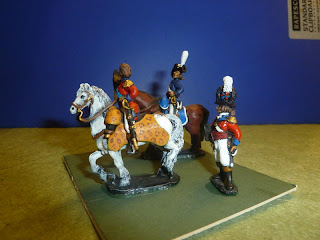 Next is my British Army command base. This has Wellesley and 2 staff officers (sold as a set by Redoubt). 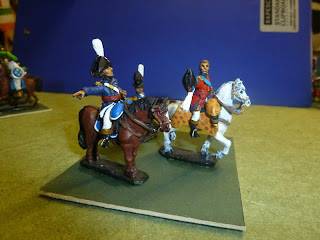 I have painted the mounted staff officer as Lieutenant Blakiston of the Engineers, one of Wellesleys most trusted officers. 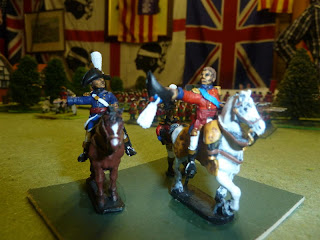 Finally a unit of Mahratta cavalry. These semi-regular guys have a common sash and turban colour for ease of identification on the wargames table. 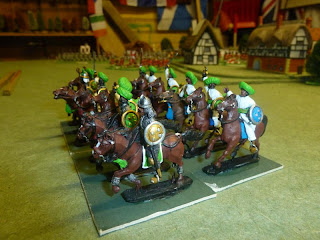 I still have to add the lances and a standard. All standards are to be ordered from The Virtual Armchair General who has a complete range for the 2nd Mahratta War. 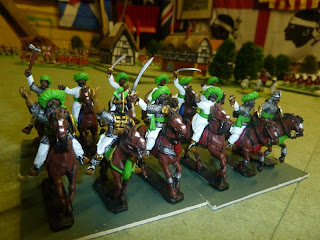 Again I will finish the bases off when I have decided exactly how I wish them to look! Maybe I am just putting the job off! 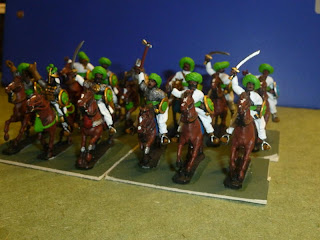 I have a number of EIC sepoys on the painting table which are nearing completion so I will post them up soon(ish).
Finally I would just like to mention that one of our number (Graham) got married at the weekend so congratulations to him! It was a great day from what I can remember!