Last night I forgot about everything this virus is throwing at us,and concentrated on having another thrilling and spectacular game,in my Gallic campaign. 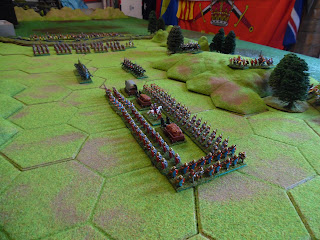 Opening move-the Gauls have appeared on the hillside,whilst the Aux. infantry have formed a defensive position around the baggage train-in the background you can see the Legion formed up to face the threat from a force of warbands-Crustinuts must make a decision-does he weaken his Legion by sending a few cohorts back to support the baggage,or does he just leave them to fend for themselves? 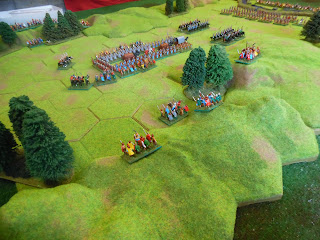 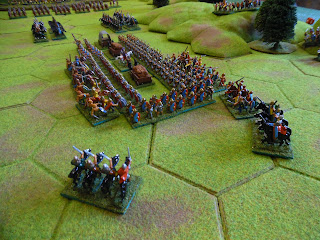 The attack begins! but not all warbands decide to join the fray at once-rather they stood back to see how the others did!!(throw of dice,2/5 they didn't move,3/4 they did!) The Gallic javelins did considerable damage to the Auxiliaries,which would tell later on when melee was reached! 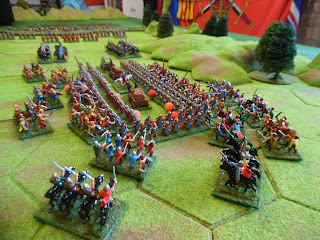 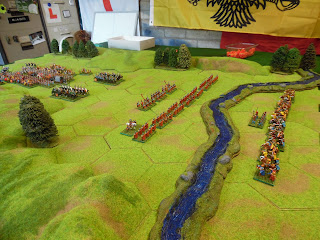 Top photo shows everyone and his Grandad joining in the fight-bottom shows the "stand-off" between the Legion and the blocking warbands,but Crustinuts has decided to send 3 cohorts to help the baggage troops-hurrah!! 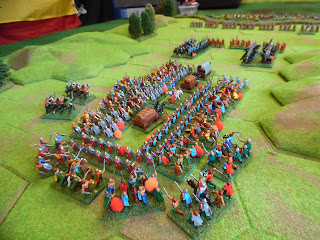 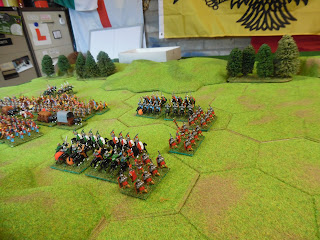 Top photo shows casualties mounting(red pom-poms) on both sides,but a breach has been made in the Infantry line,in the background you can see the equal cavalry melee going on,but in the bottom photo the 3 cohorts from the Legion have charged the Gallic cavalry in the flank-this,they did not like,and took to their heels-another hurrah! 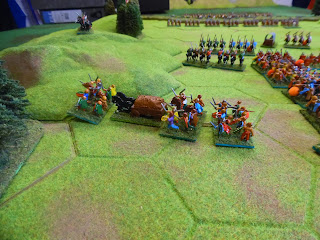 Oh no! the Gauls have captured one waggon(full of food and tents) and are making off with it! The Auxiliaries are in real trouble now,as another breach has been made in their line-can the cavalry and support cohorts make it to them in time and save them??? 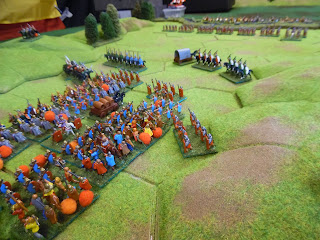 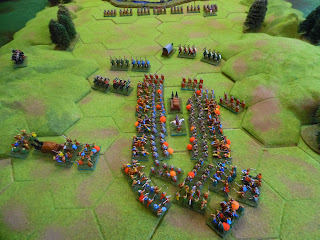 Yes they can-being attacked in the flanks and rear,the Gallic position became un-tenable,and they started to give ground and retire(it's good being retired!) 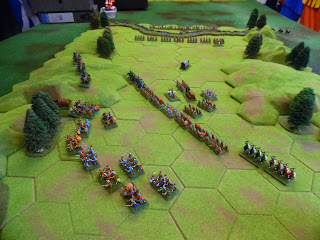 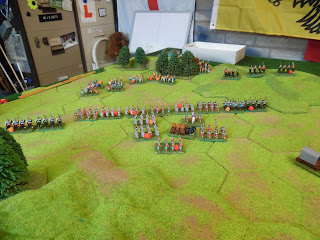 Two shots of the same thing-Romans having formed a line, and the Gauls being chased away! 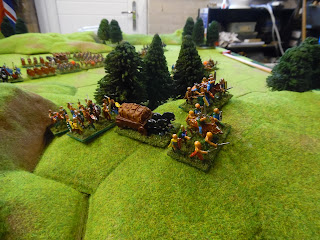 The Semones king,Horlix(The Horrible) claimed a victory,even though he lost 5 warbands and 3 cavalry units,however the capture of a waggon more than made up for his losses!The Roman casualty list consisted of 5 Auxiliary infantry cohorts-a considerable amount ,and one that may curtail the campaign,until reinforcements can arrive!!

This was another wonderful game,full of what-if's and grand dice throwing/rotten dice throwing,long may it continue!