Sunday's game was at Dave's house. Only myself and Dave reported for duty so we diced for the sides. Dave was to command the Union force with me having the Rebs.

The encounter game starts with both sides commanding four brigades per side.
We both had reserves of a brigade per flank which we threw average dice to determine the move they arrived from the road.
The initial moves saw both of us march a brigade towards the church atop the flank hill, eventually a place of a fierce tussle.
On the other flank the Union troops occupied the enclosures next to the road while advancing a brigade over the stream (half movement to cross) towards the open flank. My second (Texas) brigade came off the road to confront them!
The center of the battlefield had both commanders satisfied to remain uncommitted until a clearer position of the enemies intent emerged.
Unusually for me I had thrown a low die for my right flank reserves so they entered on move 2.
This was the signal for my leading brigade (Virginians) on the hill  to attack the 1st Iron Brigade in the enclosure across the stream.

Forward!
Firing as they advanced the Rebs crossed the stream and charged onto the Union troops defending the enclosure. Artillery flank fire didn't deter these hero's who fought hand to hand to gain for the position.

Meanwhile on "church hill" two opposing brigades were heading for an almighty clash. I arrived  there first due to the Union troops having to cross the stream first.
However, canny Dave had positioned his artillery to support this assault and they eventually weakened a regiment prior to the musket exchanges. 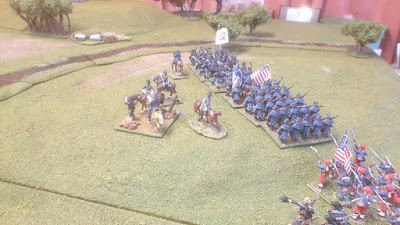 While these struggles on the flanks were ongoing the Union reserves arrived and Dave decided to throw everything at the church hill position. My Virginians were suffering.
Finally on move 5 my right flank reserves arrive.

With both flanks "busy" it was time to launch an all out attack upon Dave's central right position. Marching up the road and into the enclosure my two brigades attacked in depth hoping to break the line.
Furious fire fights and an eventual bayonet attack seriously weakens the Union defenders.
Time to put your brigadier in to bolster those men!

Of course it has been alluded that I occasionally manage a lucky throw ... and so it was the case .. "can't hit an elephant from that....." ha ha down he went!
Brigade morale left a single regiment holding the picket fence.  Dave was having to redeploy his reserve from the left flank to cover the hole.

So we left the game in the following position as someone actually has a job! No not me...

• A weakened Union left held together by that damned battery with my Rebs bloody but re-organising for a final push
• The Union centre holding on and the left successfully driving off the Rebs from the church hill and about to maneouver both brigades and two batteries onto my flank!

Brilliant scenario and a great game, phew. Thanks Dave !